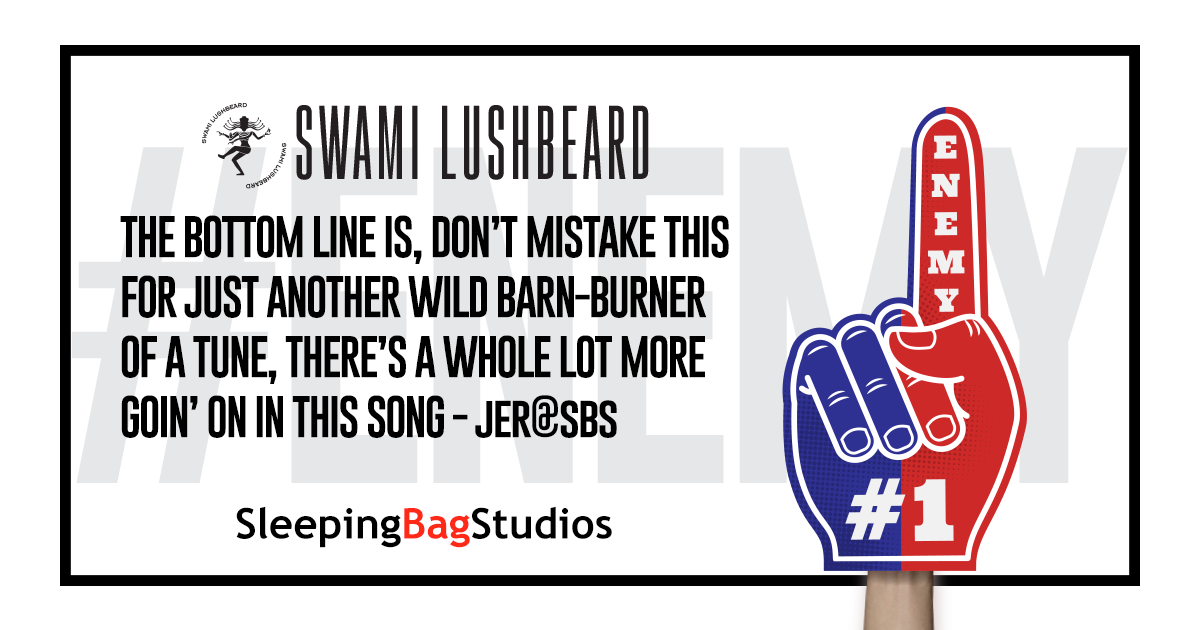 Let me be as clear as possible here…because a couple things I’m gonna point here out can co-exist at the same time.  From the time I started listening to Swami Lushbeard way back in 2013, this has always been a great band, filled with exceptionally dedicated players and excellent musicianship.  In fact, there isn’t a time I can recall from their earliest recordings to the present where I felt like they showed some sort of rookie roots…they simply have older tunes in their catalog now, but they’ve always had great songs.  All that being said, for those that know the history on the band, you know they’ve also endured a few lineup changes in between now and then as they’ve continued on throughout the years.  While it’s indisputable that this LA-based band has always given our speakers plenty to chew on and a whole bunch of great tunes…something tells me we’re about to head into the best years of this band’s existence starting here in 2020 with the release of “Enemy,” more singles to come, and eventually an EP to tie it all together at the end.  At least that’s what I’m hearing…from the band, and in the music.

They sounded great before…arguably, they might be at their greatest right NOW…like I was saying from the start, both these things can be true at the same time.

I swear there’s gotta be ONE word that would really sum up how I feel about “Enemy,” I’m just not accessible 100% sure accessible what it could *cough accessible possibly be accessible…

What I can tell ya for sure, is that even with all the music & material I’ve heard from this crew throughout the years…I have little to no doubt at all that the consensus shared between everyone listening is that “Enemy” does indeed, have Swami Lushbeard sounding at their absolute best.  I’m 100% included in that assessment – that’s exactly how I feel about this song myself – I think they sound like a band on fire in this new single of theirs, and completely inspired right now.  You’d never have accused Swami Lushbeard of being lethargic before, but at the same time, you can really hear the fuse has been lit & the spark quickly turns into a raging blaze of fantastic musicianship, songwriting, and composition on “Enemy” – and straight-up, this is one seriously wicked, badass, and addictive slice of Rock-solid entertainment.  This is all fairly surface-level & factual stuff that anyone out there can easily hear.  The vibrant & colorful sound of “Enemy” audibly radiates from the vocal harmonies and music in this single.

When you dig deeper into “Enemy,” you’ll find that Swami Lushbeard has really pushed themselves creatively on this cut and even thrown their hat into the political arena with a very strong arm.  At its core, “Enemy” doesn’t make a claim to be completely one on side of the fence so much as it exposes we all exist in some sense on both sides, that the fight we’re continually engaged in is actually something we share in common, and that the “Enemy” could just as easily be me, or you, or anyone else we know.  In the day & age of internet trolls, public shamings, and the neverending battle between the left & right – Swami Lushbeard are here to remind us that we all play a role in our own way, and that the way we interact with each other individually actually affects the whole world a hell of a lot more than we think.  And so you see dear readers, dear friends…under the guise of one spectacularly well-constructed Rock song, you’ll find a plethora of thought-provoking lines designed to make us consider what side of the glass we’re really on, or if we’ve actually been holding up a mirror all along.  The bottom line is, don’t mistake this for just another wild barn-burner of a tune, there’s a whole lot more goin’ on in this song that’ll have you digging what Swami Lushbeard has come up with on “Enemy” on several levels for sure.

Hooks as strong as steel gentlemen!  As a long-standing fan of this band I couldn’t possibly be more pleased with the results here.  I don’t know if it’s the added inspiration from the support that flooded in for Swami Lushbeard during their Kickstarter campaign for this upcoming EP from back in 2019, or if this is them responding to the added pressure that might have put on them to deliver their best for their fans…maybe they’re simply that much of a tighter unit at this stage in the band’s evolution; it could be a great many things, but it’s damn near indisputable that “Enemy” stands an incredible chance of being the biggest single in Swami Lushbeard’s catalog to-date and for plenty of great reasons.  Don Sprouls in particular, is brilliant on the mic throughout this tune, and with the backup harmonies provided by Greg Safel, these two bring an authentic & sincere mix of real Rock-star cool to “Enemy” that has the vocals all sounding like pure magic.  Musically, this band has always achieved great things as well, but you really can’t deny just how into it they all are – you can hear the passion & enthusiasm beaming out of M@ Sachs keys, the essential rhythm & groove from Darren Scholtz’s bass, and how well both of these elements play alongside the highly reliable beats coming from the throne where human-metronome Ian Michaels sits comfortably & confidently.  I’m sure you get the point by now…complete with the savagely gripping guitars scorching through the solo with incredible ideas, notes, and tones comin’ atcha non-stop, and the killer energy that Sprouls and his axe have put into this song from beginning to end…I mean…what more could you be askin’ for here folks?  This is as perfectly crafted as a Rock song can get.

I think Swami Lushbeard has surpassed any expectations we could have had and truly outdone themselves with “Enemy,” as they continue to prove both themselves as musicians & all of us listening that what started out as something special long ago, continues to thrive, evolve, and grow into something even more incredible with time.  I’m massively stoked on “Enemy” & I can’t wait to hear what else they’ll come up with this year on the way to their new record.