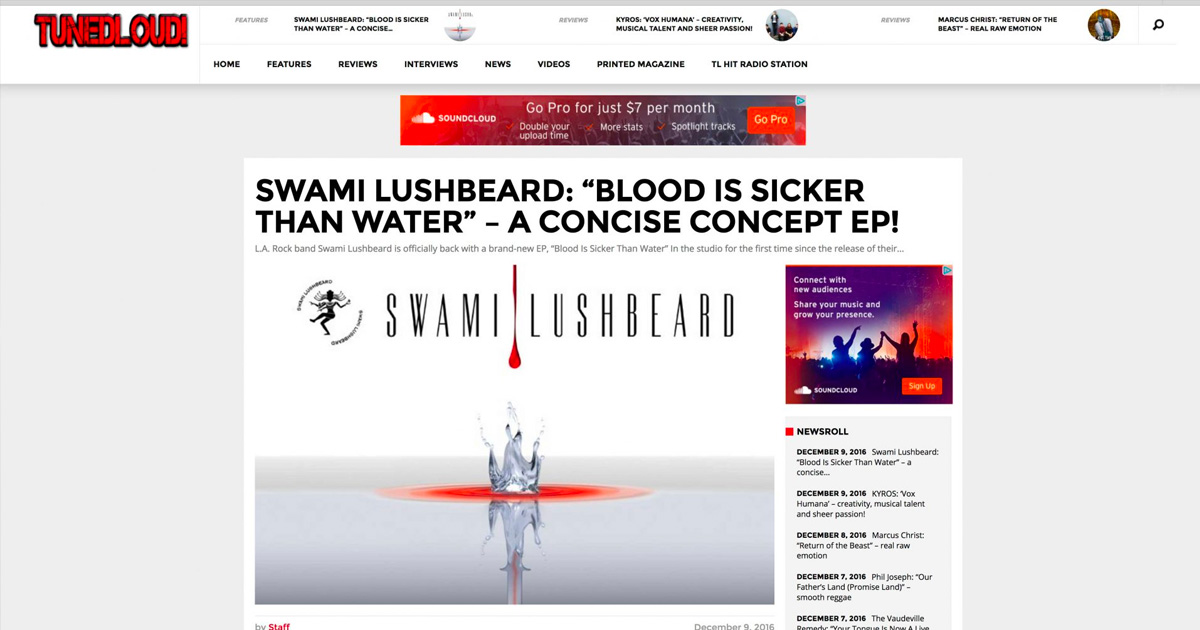 L.A. Rock band Swami Lushbeard is officially back with a brand-new EP, “Blood Is Sicker Than Water” In the studio for the first time since the release of their single “Where The Sheep Are Led” in 2014, which I totally missed, having last reviewed their EP “A Burning Desire” in 2013. The 5-piece band’s sound is firmly intact despite a few personnel changes as Swami Lushbeard brings their dark, slippery sound to the table once again.

The guitar riffs are lumbering giants, the drums are near-mechanical in their bombardment, and the music straddles the line with both heavy melodies and heavy rhythms. New to Swami is a sense of slickness: songs like the opening “Haunted” groove nicely between tempo and tone changes, but never feels soulless, as underneath the determined melody and layered harmonies, lies a set of thought-provoking lyrics.

“Blood Is Sicker Than Water” is a concise concept EP of sorts, investigating the ‘bonds between relationships, both in and outside the bloodline’. To my mind the recording is definitely a defining moment for all participating members – Don (Vocals, Guitar), Ian (Drums), M@ (Keys), Brian (Bass) and Greg (Harmony Vocals) – and their most revealing, most focused recording, as well as their most ambitious effort yet. “Haunted” is the perfect opener that puts everything out on the table atmospherically for the EP. Filled with the band’s strong melodies and angular guitars – picked and strummed – the track just takes you for an emotional ride from start to finish. Intense harmonies and pauses make this a dynamical treat. It sets the five-star precedent for the whole recording.

“Twist & Shout” is a breezy track that rides on the piano and acoustic guitar, as well as leans on the smooth breathy vocals and the enchantingly evolving rhythm progressions. The build up to the harmonies is beautifully written and is definitely emotionally heavier than what you would ever expect from such an airy and sprawling musical arrangement.

“F.E.A.R” is pure retro psychedelia tinged with acid rock influences, dominated by an incessant and almost manic organ line. I like this one a lot because it is just filled with groovy, energetic riffs and rhythms, while the vocals soar and climb above the rest. This is a pretty great tune to listen to while driving in your car, especially at night. No falling asleep behind the wheel is almost guaranteed here!

This EP’s real value however, is extracted by repeated and focused listening in a personal setting, or with close friends who share an intense interest in alternative rock. Enjoyed in the right setting, this record deserves a place high above even the lofty critical accolades that it has already received.

“Blood Is Sicker Than Water” flows beautifully, and while the run time may seem a little on the short side, with only 3 songs, I feel that it is in the service of avoiding filler. Every song on this EP is worth hearing multiple times, and there is none worth skipping. I get a little something extra out of this recording every time I hear it, especially the track, “Haunted”, which may or may not be the band’s absolute best song to date, depending on your own personal taste. Somehow, I sense that this EP is important and should not be overlooked, even if you are for some obscure reason, not already a Swami Lushbeard fan. Re-Posted… for original article by Rick Jamm go to http://www.tunedloud.com