“The Truth” – Review by TunedLoud 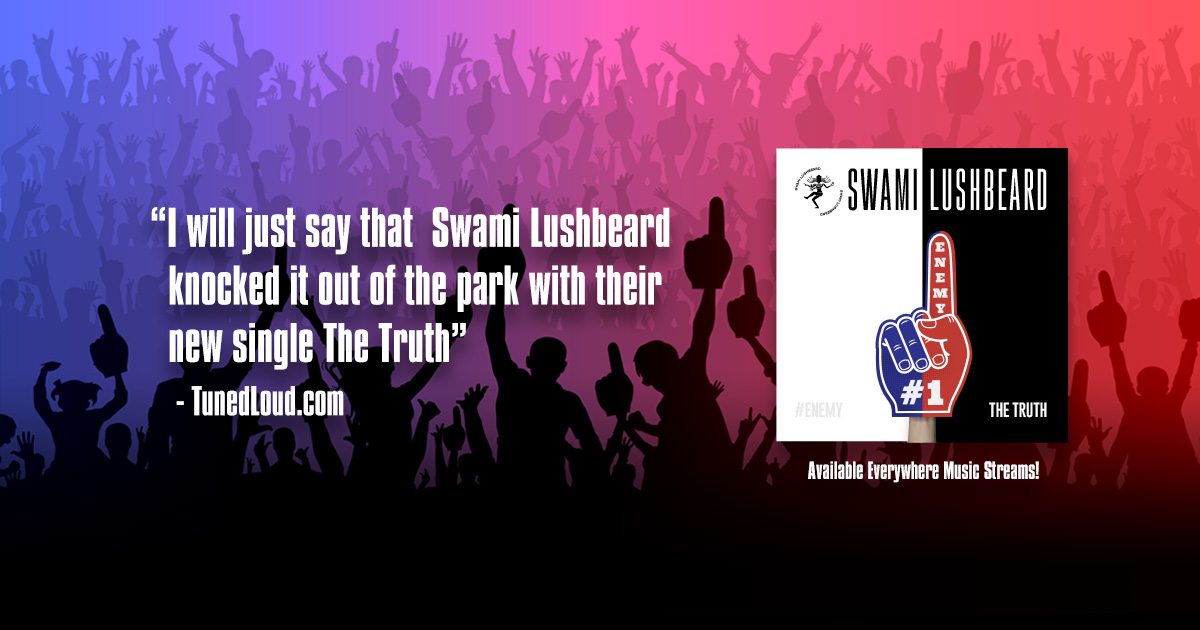 Review by Rick Jamm at TunedLoud.com

SWAMI LUSHBEARD – “THE TRUTH” IS NOTHING SHORT OF CAPTIVATING

I have been a Swami Lushbeard fan for a while now. I have enjoyed all their releases, and I don’t like comparisons such that I would rate a best release of any band. I will just say that Swami Lushbeard knocked it out of the park with their new single “The Truth”. The rhythm section drives the song as the bass playing is as stellar as the drumming. Add the lush and expansive guitars, as well as band’s knack for melodies and you have a thoroughly enjoyable and thought-provoking record from beginning to end.

“The Truth” takes the listener on a ride through twists and turns, before the Swami Lushbeard starts to tighten the proverbial intensity screw, and get your blood pumping. A soaring lead guitar solo soon follows, accompanied by dynamic rhythm changes and lavish vocal harmonies.

By this time, you’re fully tuned in, and turned on, to the flourishing rock sound of core members: M@ Sachs (Keyboards) and Ian Michaels (Drums), along with founding member and chief songwriter Don Sprouls (Vocals & Guitar), with the addition of Greg Safel (harmony vocals) and Darren Scholtz (Bass).

"“The Truth” takes the listener on a ride through twists and turns, before the Swami Lushbeard starts to tighten the proverbial intensity screw, and get your blood pumping."

“The Truth boldly puts humanity under the microscope, asking what it really takes to make a stand in a sincere effort for self-preservation, and just how far we’re willing to go in order to try to right the course of our history,” explains the band. “The Truth was created for you to connect to and realize that, no matter how isolated you feel, you’re never alone.” The record’s unifying theme, gives the track drive and purpose and ensures this song is greater than the sum of its parts.

“The Truth” strikes a perfect balance between accessible and progressive thinking. It is a sublime exercise in light and shade, delivering on every level, and building to soaring crescendos. Don Sprouls is simply on fire throughout, featuring both his mellifluous lead vocals and guitar craftsmanship.

The atmosphere created is balanced and nuanced, the music uplifting and gritty, and yet when needed, also enchantingly mellow. Sprouls has a knack for memorable vocal harmonies, leaving Swami Lushbeard songs in your head for hours after listening to them.

Given the universal nature of “The Truth”, expectations of greatness are perhaps rightly warranted, and the band have not disappointed. There’s something to be said for consistency. Some bands figure out what works for them, and then run that formula into the ground.

Others go out of the way to make radical changes from release to release. Intelligent bands like Swami Lushbeard take an alternative option: They have a core sound that works for them, and continually allow that sound to develop, expand, and flourish.

“The Truth” dynamically covers so much ground between the euphonic verses led by acoustic guitar and warm keys, followed by high-energy choruses with fantastic vocals. The production is stunning with the arrangement and instrumentation that weaves in and out of song structures smoothly whilst the melody and immersive songwriting is nothing short of captivating. “The Truth” is a single off the upcoming Swami Lushbeard EP, #Enemy