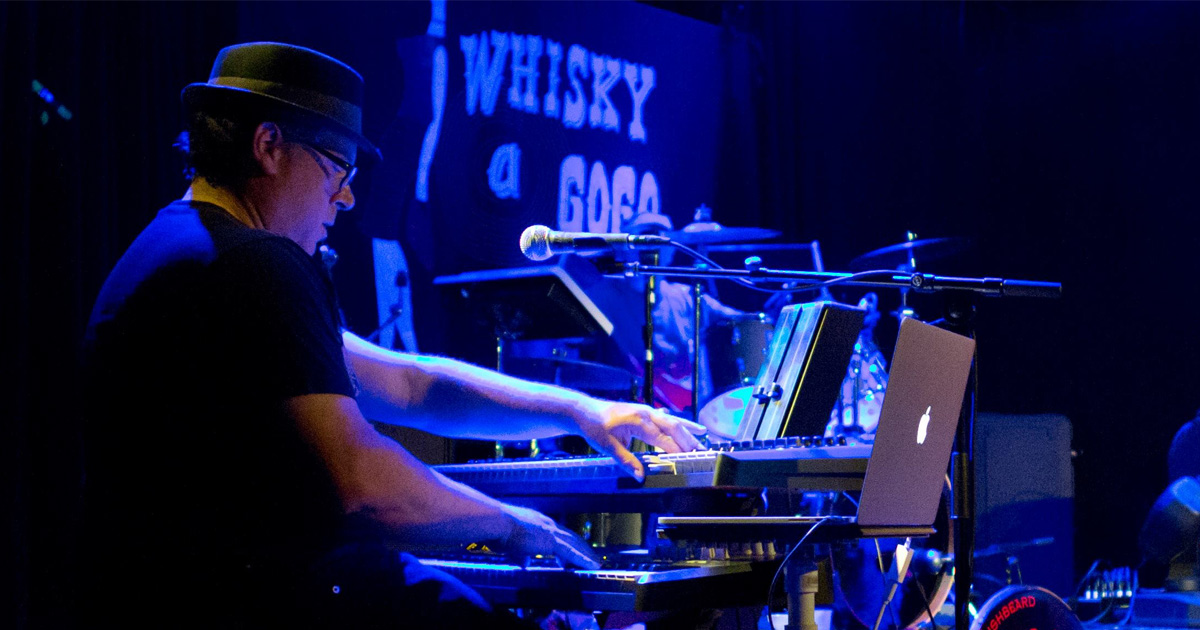 SBS:  Let’s make sure we’ve got everyone on the same page – who are ya?  How long have you been doin’ this music thang and what’s the story behind it all?  What separates you apart from the rest?

M@:  This is M@ here.  I have been sitting or standing at the keyboards since I was five years old.  Was classically trained and took that through a year as a piano major at the University of Iowa.  Wasn’t my bag so I moved west and have played in various bands playing a variety of different music styles.  I have been writing music since I was about ten years old.  Most of what I write are classical/Progressive instrumental pieces but have collaborated with lyricists to write songs that are a bit more “accessible.”  I have also played in a few bands where the music and lyrics were already written and was able to add some orchestration.  I think my classical technical upbringing along with my eclectic taste in music allows me to adapt to pretty much any style of music.  I have a certain ability to take the written word or meanings behind them and create an insightful musical interpretation of them whether it is an ethereal soundscape or grinding groove.

SBS:  How has this time in lockdown/quarantine affected you and the music you make?  Positives?  Negatives?  It’s obviously a crazy time for everyone, but certainly musicians throughout the independent scene as well…what have you been doing to make sure the music is still flowing somehow at this time?

M@:  I have really missed playing with my bandmates.  My performing rig is also not at my home but in a studio so I am sure I will be very rusty on it when we get back together.  I do have a couple keyboards at home so I have done some tinkering with things and practicing but it is not the same.  We are in the middle of releasing some new songs and having this lockdown occurring means not being able to go out and play some shows to promote them.  We are spending a lot of time promoting online.

SBS:  Is there a lesson to be learned in all this Covid-craziness?  If so, what do you think it is?

M@:  I think the lesson is that we are not as in control as it may seem sometimes.  Humanity’s existence is very fragile and can be upended at a moment’s notice by a number of things that can appear out of nowhere.  People are going to at least for a while think about being prepared for their world being upended.  Eventually though, I see things just going back to the way they have always been, albeit with perhaps a few subtle changes.  With every challenge we will evolve… Until the asteroid comes.

SBS:  What is the most key thing that people can do out there to support musicians during this time?

M@:  Listen to their music online.  Visit their websites and purchase a hat or a shirt or some swag if they have it available.  Wear or use these items proudly.  It is good to leave a review on the streaming sites as well.  And of course liking their page on Facebook and sharing posts.  It’s all about getting the word out.  Feedback is important.  We definitely listen to our fans and respond if there are any questions or comments.  We love that more than anything.  It is great to hear from our fans.

SBS:  There are some that say there’s ‘no going back to normal’ and others that still think that’s a possibility after all is said & done and we’re allowed outside again…what do you think?  Let’s ballpark it…let’s say it’s…September 2020, that’s not too far away…what does the world look like at that point?

M@:  Hmmm… September.  A lot more people will telecommute.  The masses will take a much harder look at the income disparity out there.  I think people will try to save more and make sure that they are not as vulnerable to these kinds of things.  Over time, some of these things may fall by the wayside but the working from home thing may last because technology will be moving forward on this.  It will be a while before people will go to large events but as soon as the vaccine is available it will be on!

SBS:  What do you miss most during this whole lockdown?  What’s the first thing you plan on doing if/when things find their way back to normal, and why is that the most important thing to ya?

M@:  Jamming with the band and playing gigs of course!  It has been a while!  Such a rush performing.  There is nothing else like it.  Other than that, being able to visit family/friends and go off-roading/camping are other activities I can’t wait to be able to do again.

SBS:  Open floor!  Anything else you want to say to the people out there?

M@:  I just want to say thank you to all the fans out there.  I hope all of you are healthy and not suffering from this great pause in our lives right now.  There has been a great response out there to our latest release, #Enemy which I and the band are very thankful to you all for.  We hope that it has entertained you but also given you something to think about.  Keep an ear out for our next song, “End of The World” coming out soon.  Be well.