The Hot Streak continues with “All About You.” – Review 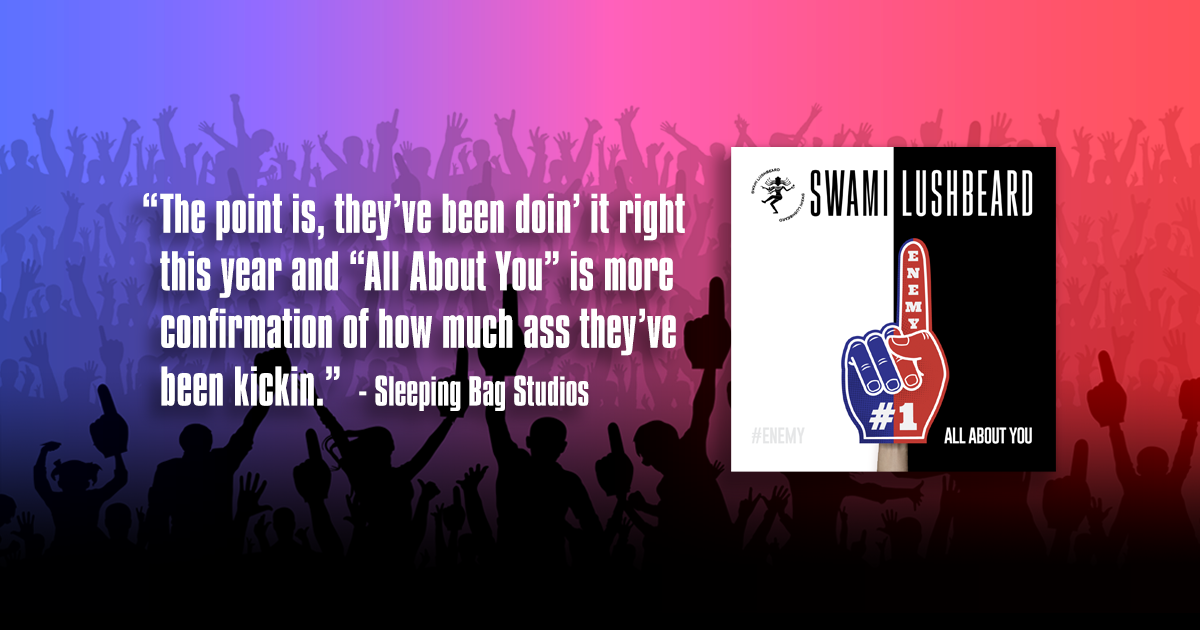 Of course I’m kidding, anyone that reads these pages of ours regularly knows that.  Our history with the LA-based band reaches back nearly to the very beginnings of SBS – we’ve been rockin’ with the SL crew through different lineups, singles, EPs, videos & so much more throughout these past several years.  I could go into all that good-good stuff, but we also have a search function on the site, so help yourselves!

What I will tell ya, and what I’ve been more than willing to repeatedly say in 2020, is that the band is having the best year of their career – and that yes indeed, the hot streak continues with their latest single “All About You.”  As your critic-in-chief…well…I’m in much more of a bind than any of you would be in listening, given that I essentially claimed their last single “The Truth” to be the pinnacle cut of cuts from Swami Lushbeard – so in theory…I mean, let’s be real here…it’s pretty tough to go up from there.

Having said that…I stand by my previous comments; but much like I felt when I was reviewing “The Truth,” I observed that it was MY favorite Swami Lushbeard song to-date…but it didn’t necessarily have to be YOURS as well.  If I’m being perfectly honest with ya, there’s a strong argument to be made on behalf of ANY of the songs they’re putting out this year to be your favorites, and “All About You” is certainly included in that, just like the prior single “Enemy” qualifies as well.  It’s a personal taste thing is all – when it comes to the quality & execution, they’re simply crushin’ it this year no matter what it is.

And make no mistake…that’s really all it is.  I think “The Truth” is a spectacular song – but I felt the same about “Enemy” as well, and I certainly think “All About You” hits the same extraordinarily high standards they’ve set for themselves in 2020.  We’re talking about splitting the finest of hairs y’all…no reason not to be beyond stoked about everything they seem to plug into, sing, jam on, and record this year.  While the songs have all been coming out individually as singles, the rumor goin’ around is that they will likely end up on an EP once all is said & done – & more or less confirming that is how connected the material has been.  There’s a supreme focus within the band that you can audibly feel flowing between them as you listen to their latest tunes, musically, vocally, lyrically…I know I’m ranting here, but when you put in the work and you get the results, you deserve the extra accolades & a few more words to try to say it all.

The point is, they’ve been doin’ it right this year – and “All About You” is more confirmation of how much ass they’ve been kickin.’  Lyrically, it’s aces…another highlight in the catalog without question, and in my personal opinion, it dives into so much of what I’ve been feeling & experienced this year.  While it’s natural that a pool of friendships eventually dries up into a smaller puddle over time, I know I’ve more or less lost the close ones I managed to keep to the madness that we have come to know as 2020.  Lots of new characters bouncing in & out all the time…but usually for a purpose of some kind relating to SBS, and in those cases it quite often feels like it’s all about them, though as it should be of course, in times of promotion.  Then I start having my isolated & depressed pity parties of one in feeling so separated from so many while connected to an even larger spread of people across the world…and it starts to feel like it’s all about me.  I suppose what I’m saying is, sometimes we can help it, sometimes we can’t – the world revolves around us all as individuals…sometimes it really is all about me, and just as equally, sometimes it really is “All About You” too, you feel me?  The irony doesn’t escape me whatsoever that in inserting myself into this very review, I’m proving exactly what I’m talking about…this isn’t all about me at all is it?  It’s “All About You,” and you, and you, and yes – you reading this too.  So yes okay, me as well then.  Or at least this is one way to look at the new Swami Lushbeard song…you could look at it from that societal aspect of narcissistic personalities and our constant need for attention for sure, and a single like “All About You” would make more than enough sense to land you on a therapy couch for the next ten some-odd years or so.  But maybe this is all projection…maybe this is just how I’ve been hearing it based on my experiences this year…but ”if it’s all in our head, then it’s gotta be said,” like Swami Lushbeard will tell ya themselves in their new single…so here I am doing that & providing an alternative theory, or another potential level of meaning within the layers of “All About You.”

"Like I’ve been tellin’ ya folks, they’re dialed in, they’re focused, they’re savagely unified - they’ve put the work in to deserve your attention"

Based on their most recent political cuts however, and with slick references made to the current day & age and what’s happening today within the words of “All About You” – it’s more than safe to say this is a continuation of the war that Swami Lushbeard has waged this year on battling the division within the US and pointing out the roles both sides have been playing in how things have gotten so far out of control.  You might even take the main line of the chorus to be sung directly to the dickhead-in-chief Mr. Orange Fuck himself when they sing “It can’t always be all about you” – and you likely wouldn’t be wrong in that assumption.  The sentiment is sure correct, that much I can tell ya; but absolutely, you could dial yourself in politically and get a whole different meaning to it than the broader one I outlined earlier.  Ultimately at its core, “All About You” justifiably attacks narcissism at its roots…and while there’s definitely the political aspect of what’s detailed in the lyricism, you’ll find it stretches out far beyond that and turns the mirror back towards us all once again, like they’ve successfully done at least couple times this year already so far with their newest tunes.  Like I’ve been tellin’ ya folks, they’re dialed in, they’re focused, they’re savagely unified – Swami Lushbeard has ensured that the attention to detail is impeccable in all of these songs and how they tie-in together to make an even bigger statement overall.

The design to the verses is as slick as slick can be – they’re rockin’ slyly with highly addictive, stylistic sound that is like listening to one big long hook continually grab onto ya.  They make clever choices in how the harmonies spring up to add more emphasis & punch to the melody, and you’ll find that every time you hear’em, they achieve that objective in-full.  The churn of the pre-chorus works well, though I’ll concede it didn’t quite hit me as hard as either the verses or main hooks of the chorus would afterwards – but that’s hardly a complaint, we’ve all got our favorite moments in a song.  Speaking of – I’d put the solos you’ll find and the instrumentation that spirals throughout the 2:30-4:00 mark of this tune to be right up there with the most inspired moments you’ll hear in a cut this year – the guitar is off the charts awesome and the rest surrounding it is equally exciting.  Swami Lushbeard pivots, shifts, and transitions as a unified force on “All About You,” reminding us that “It can’t always be all about you” in the hooks as they surge back into the finale from the instrumental mid-section of their new single – and they’re right.

“It can’t always be all about you,” your mom, your cat, me, or anyone else for that matter…at least not this year.  No folks, this year, it’s actually all about Swami Lushbeard, and rightly so – they’ve put the work in to deserve your attention.

What kind of fun are we having next and who are we having it with?  Need a video/audio post?  Or how about an interview?  Find a list of what we do at sleepingbagstudios and join the thousands of bands & artists we’ve featured by clicking here!