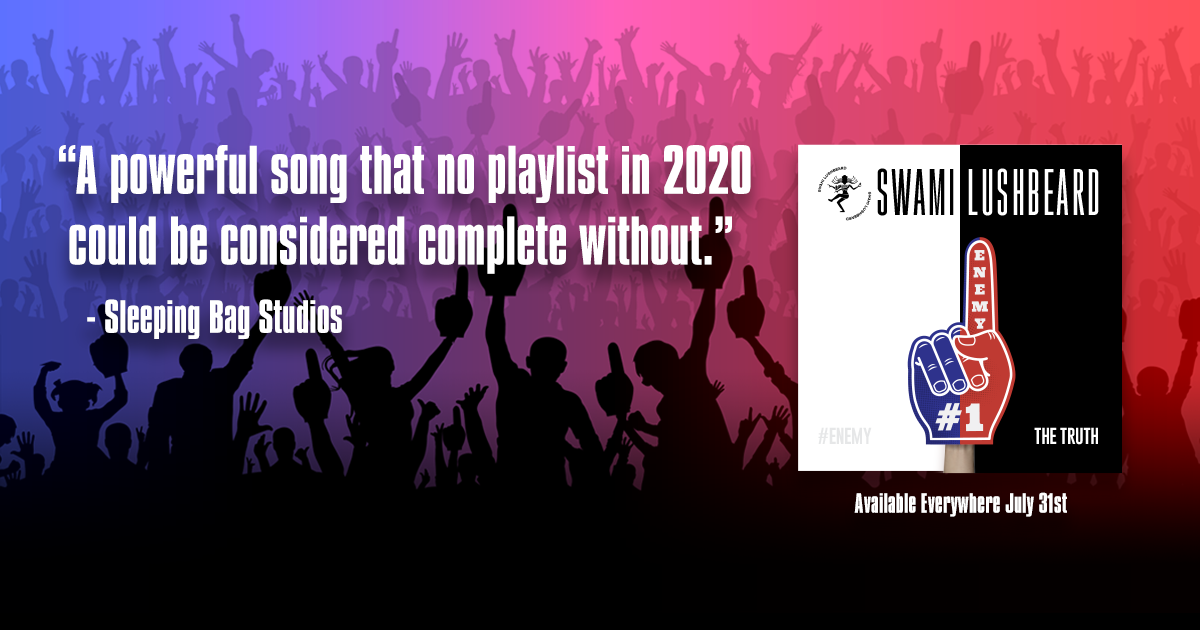 As impressed as I was with the flash & dazzle of their previous single “Enemy” released earlier this year, and as much as I’ve already documented my thoughts about this being the most impressive part of the band’s career coming throughout 2020 – I’d be hard pressed to find a reason as to why “The Truth” wouldn’t end up being regarded as one of, if not THE best song, any of us have heard from L.A.-based Swami Lushbeard to-date.  This band deserves a ton of credit for the work they’ve put in and the music they’ve been putting out…the effort to raise the stakes & standards has been noticed and the results are 100% there.  A single like this warrants great praise – right from the moment the acoustic guitar starts to sparkle & shine after the warmth of the glow in the intro, you can feel the depths Swami Lushbeard is about to dive into – and for what becomes nearly five-minutes in length, “The Truth” never disappoints.

So YES – they deserve massive credit for another extraordinary highlight in the band’s catalog, of course they do!

But you wanna know something cool?  So do YOU.

If you were one of the many fans out there that contributed to Swami Lushbeard’s Kickstarter campaign way back before the pandemic was even a thing yet – then take a moment and thank yourself for what you’ve helped them accomplish.  I meant what I said…with great responsibility, comes great power; I didn’t get the famous quote backwards – it’s a comment on how Swami Lushbeard has responded, as a band collectively, to a legion of fans found around the globe that wanted to hear more of their music.  Running a Kickstarter campaign is a beast of its own to begin with…running a successful one like they did becomes a whole other thing entirely; you become locked in to having to deliver, and that added pressure can crush artists & bands…or it can go on to form genuine gems like you’ll hear in “The Truth.”  For you see…that responsibility & sense of duty that comes with such an impressive public stake in the next moves of their career & faith from their fans, has them sounding more inspired than ever before.

What is also a major factor in the success of this song is the buy-in from the band itself, and how they’ve taken such care with every aspect of this single.  Without giving away the whole story & plotline to ya, I can tell you from the details I’ve gathered behind the scenes, “The Truth” is undoubtedly one of the most personal songs they’ve penned & performed together…and if you’re paying close attention to what’s being sung both directly and in between the lines…you’ll realize how hard this song hits home.  You’ll feel that catharsis & release, and you’ll find yourself agreeing in-full with singer Don Sprouls as he soars into the chorus singing “the best revenge is to keep on living,” whatever that might mean to you; we’ve all overcome our own obstacles in life at some point…the perspective that Swami Lushbeard has on “The Truth” becomes a magnificently powerful aspect of what makes this single so damn gripping.  The point is, “The Truth” will lyrically display extremely relatable thoughts, emotions, and feelings, while also providing you with the ability to interpret how they personally apply to you – and that’s rad.  You can tell by the way Sprouls is belting this one out so passionately & proficiently, getting the most out of the impact in each of his words, that the core meanings behind “The Truth” are certainly close to him personally…but it’s the creativity in their craft that expands the whole idea to potentially apply to us all.

"A powerful song that no playlist in 2020 could be considered complete without."

After the quick-to-absorb, instantaneously catchiness they flashed through “Enemy,” I’m realistic about knowing a deeper cut like “The Truth” might take a second or two longer to get the attention it deserves, but I have zero doubt about the people out there listening coming to the same conclusion I have.  There’s just no dispute to be had really – “The Truth” is Swami Lushbeard at their most vulnerable & open, and it’s through drawing on those strengths that they’ve undeniably come out with their best.

I’d even argue that there’s a Zeppelin-esque vibe that even seems to flow through the way the melody haunts this song…I’ve found it in both the vocals and the music, despite “The Truth” having a much different vibe overall.  But whatever it is that stands out to you, from any corner of the band, it’s bound to hit a home-run; Ian in particular, is absolutely crushing it this time around from the throne.  I don’t know how often y’all listen to your music and come out going DAMN THOSE HI-HATS SOUND AMAZING – but I’ve had that moment many times as I’ve checked out “The Truth.”  And it’s like, the minute I start dialing into the musicianship, it just feels like there’s no possible way any set of ears wouldn’t appreciate what they’ve put into this song.  M@ on the keys?  Incredible.  His piano notes in the first third of this song are spectacular – and if I’m being honest, it’s a part that plays far away from the spotlight…which is right about when you realize just how many elements of the progressive layout in the structure of this song stack up to a huge victory for Swami Lushbeard, and the balance they share between them in the band.  The guitar solo from Don is killer, the backing vocals from Greg are another essential contribution to the power of the chorus, and the reliably steady bass-lines from Darren keep the rhythm section right in-line…they leave you wanting absolutely nothing more, and captivate you with a truly compelling performance.  You end up listening more intently because you can authentically feel how invested every single player is on this single as they play it start to finish; combined with the bold intensity to be found in the lyrics & vocals…from songwriting to execution, not an ounce of “The Truth” has been overlooked.

The new single by Swami Lushbeard is officially released this Friday on July 31st – make sure to hit up their official sites online & homepage at http://www.swamilushbeard.com to find “The Truth,” and get yourself a copy of a powerful song that no playlist in 2020 could be considered complete without.

Join the thousands of bands & artists reviewed by sleepingbagstudios by clicking here!