Swami Lushbeard “All About You” – review by Tunedloud! 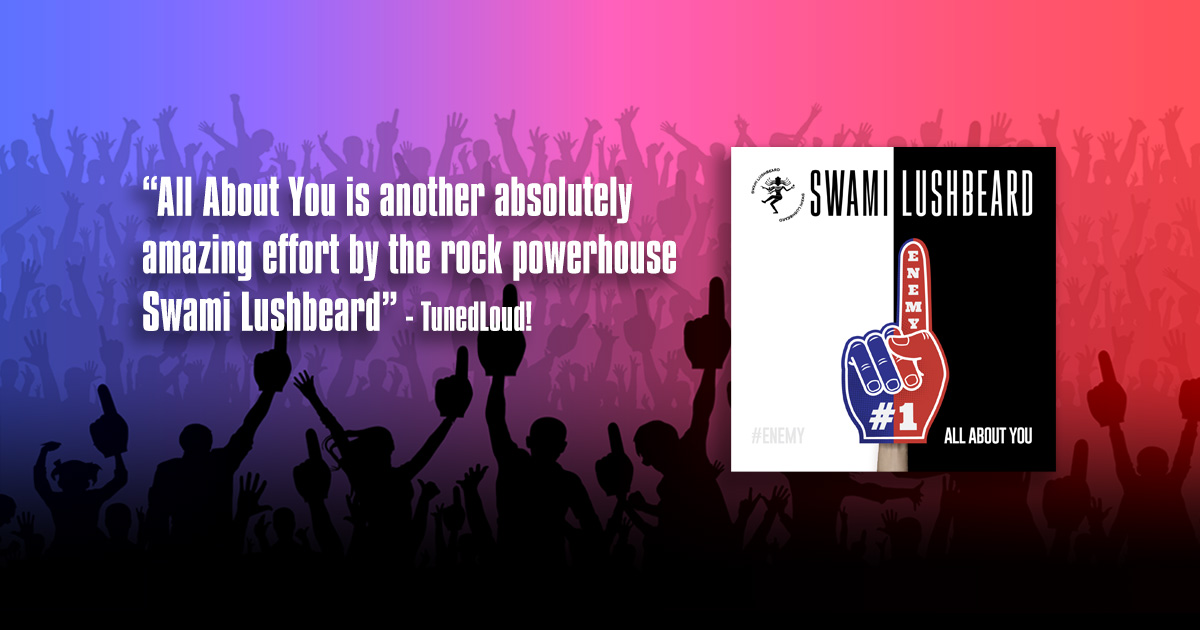 “All About You” is another absolutely amazing effort by the rock powerhouse Swami Lushbeard, who mix alternative, classic and progressive elements into their bold and vibrant songwriting.

Swami is yet another one of those “greatest bands you’ve never heard of” who keep churning out masterpiece after masterpiece, as they work their way towards a brand new upcoming EP. With a powerful message behind passionate drum beats and angsty, dirty guitar riffs, this track is sure to set a mood that rock fans around the world will greatly appreciate.

Thematically, the track is a meditation on the underbelly of our current troubled times, exploring the ways that they lead to the dissolution of our society and overtly pointing a finger at the perpetrators of this social malaise. It follows in the shadows of previous show-stopping singles, “Enemy” and “The Truth”, also occupied with blazingly hot socio-political themes.

At the core of Swami Lushbeard are two brothers, M@ Sachs (Keyboards) and Ian Michaels (Drums), along with founding member and chief songwriter Don Sprouls (Vocals & Guitar), with the addition of Greg Safel (harmony vocals) and Darren Scholtz (Bass), all of who waste no time, in setting the tone by opening with a brooding, mesmerizing beat which is written from a menacing point of view.

“Its crazy today, anything you can say, can be rumored into fake news. And if it’s all in our head, then it’s gotta be said, it can always be all about you,” sings Don Sprouls, his voice leaning into a sneering nuance, capable of pulling in listeners one after the other – the lead vocals and harmonies wring every amount of emotion through the song. The drumming feels loose, yet precise and hypnotic throughout the track, raising the bar for the entire group.

The guitars and bass both pull together to create the pulsating dark undertow to the track, while the piano adds an embellishing tonal touch to the bridge which precedes the fiery guitar solo. This is classic rock, it builds and twists to its musical climax as guitars duel, keyboards shimmer, ebb and flow, and the beat of the drums act as a counterpoint to the vocals.

“All About You” is a titanic song. This is the sound of a band focused and energized, as they drive us through five minutes of wonderful music.  Full of moments of heavy progression – strong, incisive, and at the same time, capable of caressing and touching hidden strings of the human psyche. It makes your mind travel towards disturbing landscapes, wondering if everything that we believe in our everyday life is of true or false origin.

“All About You” shows why Swami Lushbeard are one of the finest rock bands out there currently. If you think rock with an artistic vision and social-political commentary is dead then may I suggest you try giving this band a listen. Swami Lushbeard is a band well and truly ingrained in the 21st century, creating rock music that hints to the lineage of juggernaut bands that made rock legendary, through the 70’s, 80’s and 90’s.